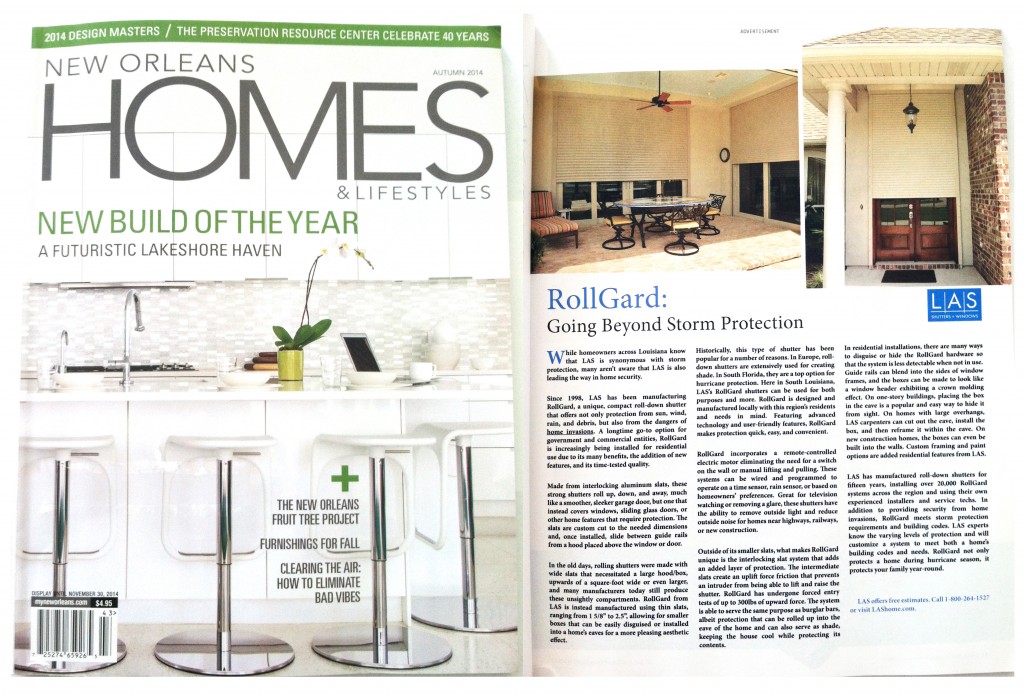 Did you see us in the Autumn 14 issue of New Orleans Homes & Lifestyles Magazine? Our RollGard shutters were featured in an advertorial talking all about the benefits they provide to your home. Read on below!

While homeowners across Louisiana know that LAS is synonymous with storm protection, many aren’t aware that LAS is also leading the way in home security.

Since 1998, LAS has been manufacturing RollGard, a unique, compact roll-down shutter that offers not only protection from sun, wind, rain, and debris, but also from the dangers of home invasions. A longtime go-to option for government and commercial entities, RollGard is increasingly being installed for residential use due to its many benefits, the addition of new features, and its time-tested quality.

Made from interlocking aluminum slats, these strong shutters roll up, down, and away, much like a smoother, sleeker garage door, but one that instead covers windows, sliding glass doors, or other home features that require protection. The slats are custom cut to the needed dimensions and, once installed, slide between guide rails from a hood placed above the window or door.

In the old days, rolling shutters were made with wide slats that necessitated a large hood/box, upwards of a square-foot wide or even larger, and many manufacturers today still produce these unsightly compartments. RollGard from LAS is instead manufactured using thin slats, ranging from 1 5/8” to 2.5”, allowing for smaller boxes that can be easily disguised or installed into a home’s eaves for a more pleasing aesthetic effect.

Historically, this type of shutter has been popular for a number of reasons. In Europe, roll-down shutters are extensively used for creating shade. In South Florida, they are a top option for hurricane protection. Here in South Louisiana, LAS’s RollGard shutters can be used for both purposes and more. RollGard is designed and manufactured locally with this region’s residents and needs in mind. Featuring advanced technology and user-friendly features, RollGard makes protection quick, easy, and convenient.

RollGard incorporates a remote-controlled electric motor eliminating the need for a switch on the wall or manual lifting and pulling. These systems can be wired and programmed to operate on a time sensor, rain sensor, or based on homeowners’ preferences. Great for television watching or removing a glare, these shutters have the ability to remove outside light and reduce outside noise for homes near highways, railways, or new construction.

Outside of its smaller slats, what makes RollGard unique is the interlocking slat system that adds an added layer of protection. The intermediate slats create an uplift force friction that prevents an intruder from being able to lift and raise the shutter. RollGard has undergone forced entry tests of up to 300lbs of upward force. The system is able to serve the same purpose as burglar bars, albeit protection that can be rolled up into the eave of the home and can also serve as shade, keeping the house cool while protecting its contents.

In residential installations, there are many ways to disguise or hide the RollGard hardware so that the system is less detectable when not in use. Guide rails can blend into the sides of window frames, and the boxes can be made to look like a window header exhibiting a crown molding effect. On one-story buildings, placing the box in the eave is a popular and easy way to hide it from sight. On homes with large overhangs, LAS carpenters can cut out the eave, install the box, and then reframe it within the eave. On new construction homes, the boxes can even be built into the walls. Custom framing and paint options are added residential features from LAS.

LAS has manufactured roll-down shutters for fifteen years, installing over 20,000 RollGard systems across the region and using their own experienced installers and service techs. In addition to providing security from home invasions, RollGard meets storm protection requirements and building codes. LAS experts know the varying levels of protection and will customize a system to meet both a home’s building codes and needs. RollGard not only protects a home during hurricane season, it protects your family year-round. 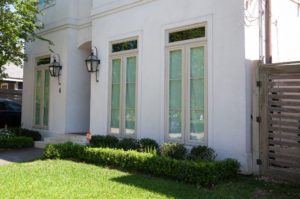 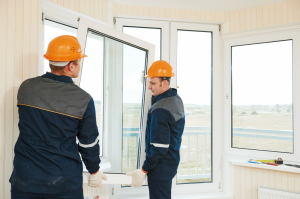 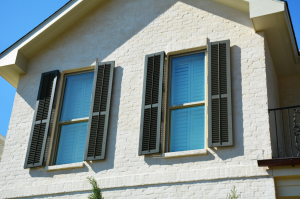